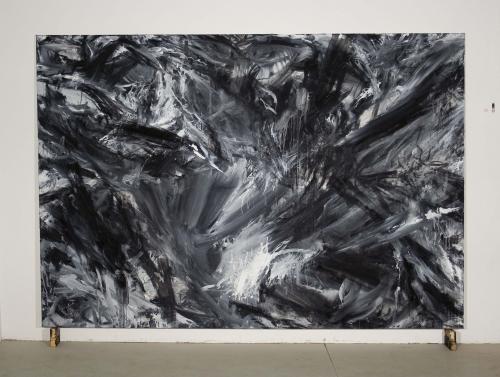 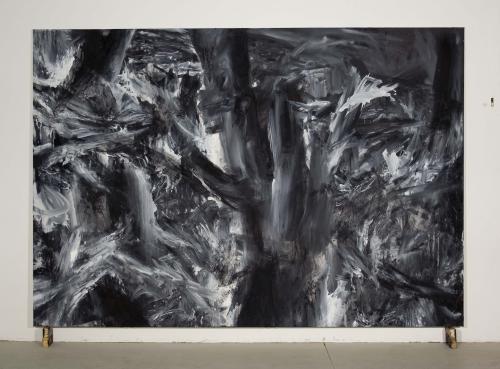 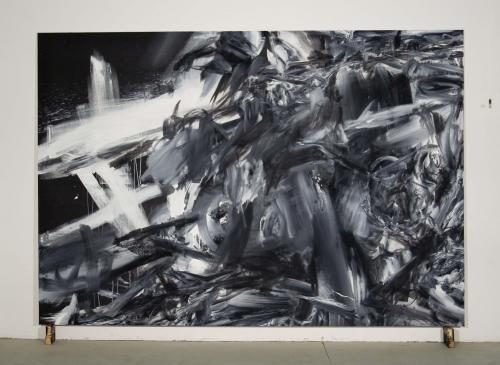 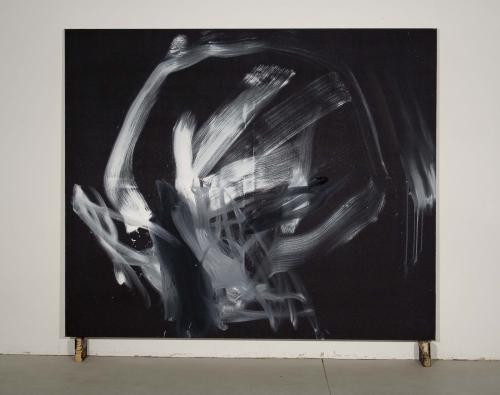 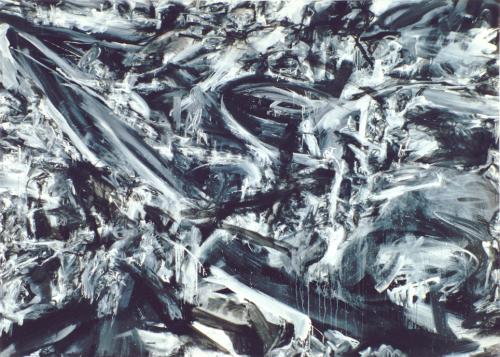 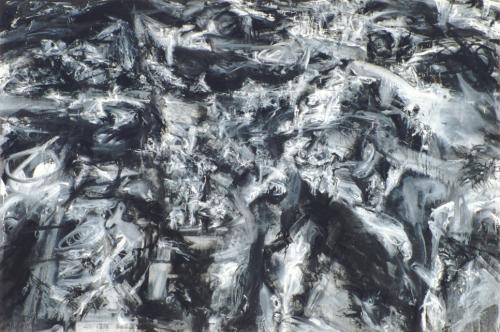 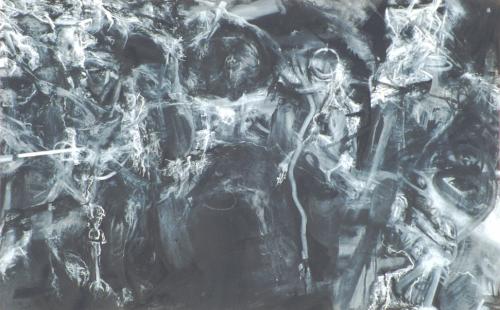 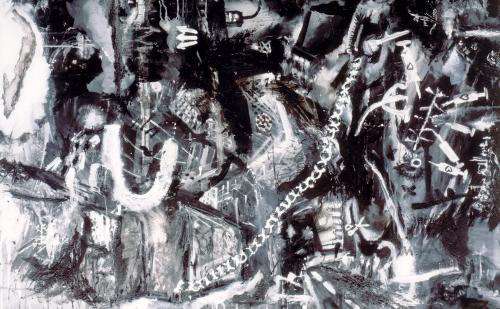 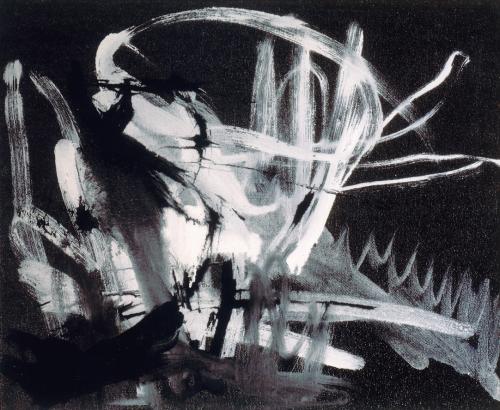 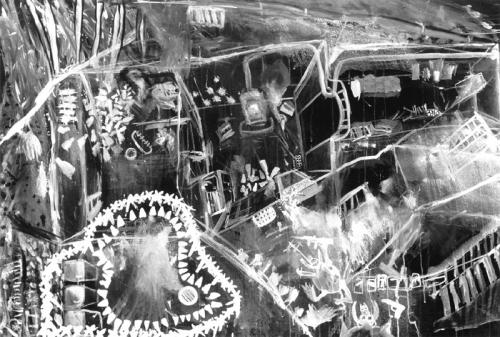 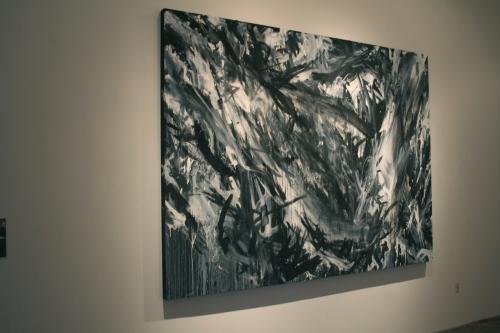 Dr. Andreas Vowinkel writes in the catalogue: "Pictures. Very far away; on the invention of longing for a sky of only flowers, the waiting until dawn and the trap of being apart." published by Baden Art Association, Karlsruhe, Germany and Art Association Braunschweig, Germany, ISBN 3-89309-083-5 "I allow a form more freedom, if I do not evaluate it with colours" (assign it colour)
(Christian Moeller)

The paintings of Christian Moeller exert an exotic attraction. Developed merely in black and white tones on large canvasses, the intense, attenuated and pushed movements draw the viewers attention into an impenetrable thicket of compact and transparent forms. They remain fragments rendered two dimensional, however they are in every section modelled multi-layered colourspaces. In no place do these brushstrokes evoke peace and resignation or inner balance in the circling, directed, elliptical or linear forms. More than that, the restlessness and shorthanded notation of colours, which is an intense series of signs and letters scribbled in extreme excitement comparable to a letter or entry in a diary and forming both a unity during the more distant process of reading as well as a readable message, is in danger of drowning on the canvass in a chaos of pictorial signs and endless spaces. Given over to the pull of cosmic breadth in the boundless universe, which is incomprehensible to human conception, single formed shapes reappear as unexpectedly out of the abyss as they disappeared.

The paintings of Christian Moeller generate their inner tension in this border area between the surface of the canvass, which reveals the traces of the set colours, and the pictorial depth of colour modulation in endless ratios of black and white tones in all thinkable values of grey to dark black to brightly sparkling flashes of white light. They invite looking. They attract and allure the observer to be reluctantly involved in the dramatic event. Even when he, with aversion and fear of the unknown of such worlds which do not promise beauty, or enjoyment of the aesthetic but probably dread and abysses, tries to defend himself against these, and in trying to resist, then still only looks into himself. The images guide the observer, once submerged inside these dim labyrinth spaces, left alone yet directed by the artist, as Vergil by Dante in the "Divine Comedy", to the world of the inferno as well as to happiness, where life is played out. The longer one stays in these broad painted spaces and moves through them, the richer and more surprising the discoveries of those images which start to come up in our fantasy, occupying our thinking recome. These are not the images which obsessed Christian Möller when he departed on his artistic incarnations, but our own images, which we discovered inside of us.

The canvasses with their large format contribute considerably to this. They exceed proportionally the natural scale of the body and the area which in the process of painting can be reached by the arms from a single position. The format forces the artist as well as the spectator to move constantly in front of the canvass, to change posture, and to change standpoint for painting or looking at. Out of the movement, which is not alone conditioned by the body, but as well, or even above all, manifests itself in the intellect, spirit and emotion of perceptual thinking, sensing and remembering, the abstract shorthanded colour notations condense to formed shapes with an inherent structure and an organic regularity. And the apparently impenetrable chaos of colourspaces gains order, direction and balanced stability. Therefore, each painting is necessarily the result of a timely work process. Within this process from the first notation on an empty canvass to the finished image structure, Christian Moeller lives through all the ups and downs of inner and external tensions, perceptions, observations and events he encounters in his daily life. He pictorially develops them to the point where he binds himself to one state after many solid and transparent coatings in compact, condensed colours and/or transparent, dissolved colours and leaves them where he feels he has found his inner balance, as he himself points out: "And when I see that this is in agreement with me, then I have achieved a lot…" (in: Christian Moeller, Wir Kinder vom Rhein, 1994, published by Staatliche Akademie der Bildenden Künste, Karlsruhe)

Even when unexpectedly figurative allusions to people, landscapes or emotions appear, showing the intellectual background which might have occupied Christian Moeller while working, it is in the working process itself that his works gain their formal and substantial density, maturity and finality. This then shifts into an ambivalence of the real only in the state of internal concord between the artist and his work. It is the ambivalent autonomy of the picturesque in painting which reflects itself sui generis. And it is the ambivalence of content which draws its potential statement from the substance, structure and density of the artistic design of colours and forms in the tension between the abstract and the concrete in their states of reality. This ambivalence charges itself with real thoughts, associations and emotions, in whose images we can discover and recognize ourselves, the reality of our being, seeing, thinking and feeling. Christian Moeller underscores this tendency in the readability of his paintings with titles, such as those of the works shown and documented here:
"Stumpf ist Trumpf" or "Und schon wieder ein Tag näher am Grab" (1994), or "Neues aus dem Land der Missgunst und warum die Gräber voller Optimisten sind" (1996), or even "Nur noch Blumen am Himmel" (1997), "Bei der Verleihung des Staatsstipendiums für geistige Aufklärung erinnern wir uns an den Tafeldienst" or "Der neue Weg und der letzte Dreck und zur Gewöhnung an Arbeit und das Licht auf den Feldern dahinter" (1995)
These verbal and therefore autobiographically motivated images rendered artistic and deduced from everyday experiences and critical observations of the events around him,
finally gain a dimension and legitimisation exceeding the artist himself in the sense, which Christian Moeller sets for himself: "What is crucial is seeing the relationship between oneself and the world."(Christian Moeller)
_________
"Dull is Trump"
"And Once Again a Day Closer to Grave"
"New from the Land of Grudge and why the Graves are Filled with Optimists"
"Only Flowers left in the Sky"
"At the Awarding of the State Scholarship for Intellectual Emancipation We Remember the Table Service"
"The New Path and the Last Dirt and getting used to Work and the Light on the Fields Beyond"